Out of the blue, an ol' university friend contacted me two weeks ago asking me to identify a church with real financial needs, so that he can channel some funds.  Ah, an early Christmas gift maybe.

Of course, every church would gladly welcome any amount of financial support. I observed that among the Mandarin-speaking churches, it's hard to find one with desperate financial needs. However, most indigenous churches are in need, a reflection the lower socio-economical circumstances of our bumiputera brethren.

Somebody once said that the bumiputera church is the backbone of Christianity in Malaysia. Notwithstanding the government-sanctioned Islamisation of our country, nobody can say that Christianity is a pendatang religion. The indigenous church has been in Sabah way before our country achieved independance, and is here to stay. Unfortunately, many of these churches are left to fend for themselves, while the rest of Malaysian Christians celebrate God's blessings in the cool confines of carpeted churches with top-notch audio-visual equipments.

After a quick discussion with Pastor Omrinus, the Ketua Kawasan of the Keningau area SIB (Sidang Injil Borneo - Borneo Evangelical Church), we narrowed down the search to a little preaching point called SIB Liau Ulu. For the uninformed, Keningau is located in the heart of interior Sabah, a place where government teachers and doctors loathed to be sent to... which happens to be where your's truly is placed in exile. This little town serves as an administrative and commercial centre for interior Sabah, supporting the surrounding districts of Tenom, Tambunan, Sook, Nabawan, right up to the Kalimantan border. No, people here no longer live on trees... but there is still no McDonald's or Sushi-King in sight, not even a cinema.

SIB Liau Ulu is a preaching point located about 20 km from Keningau town. It is currently under the care of the nearby SIB Bunga Raya. I have arranged a field trip with Pastor Omrinus to go on-site to take some photos and write a story for the kind donor, so that he knows where his money is going to. The kawasan treasurer brought us there in his 4WD. 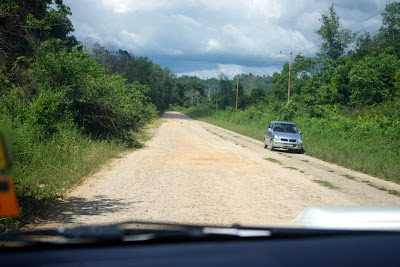 About 15 km along the Keningau-Tambunan main road, we turned left into a stretch of untarred road. The locals call these jalan kampung, or jalan belum aspal. 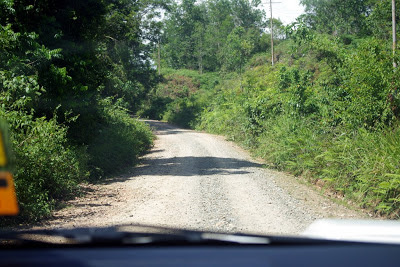 After crossing some rivers and climbing a few hills, we arrived at the destination. 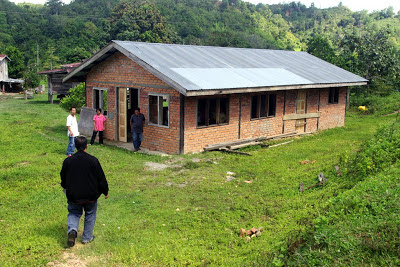 There it was, the cute little church. To my surprise, the good pastor has called up a little group to meet us there. No it's not a new building under construction. It's a functional church that conducts weekly Sunday service and other fellowship activities. It's just that due to limited funds, covering the brick walls and a coat of paint are lower on the priority list. 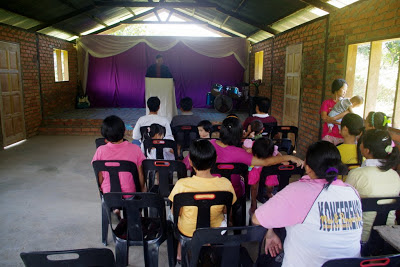 Most of the menfolk were out at work, leaving the ladies and kids, plus a few church deacons there to witness the handing over of donation. Compared to your church, you would probably notice some subtle differences... the interior walls were bare, the pane-less windows offered a wide view outside, and the floors looked like it needed some tiles. The thin zinc roof did little to keep out the midday heat. 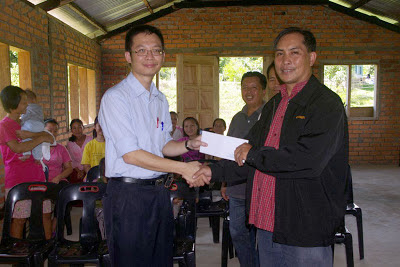 It was the pastor's idea to have the congregation over to witness the handing over of the cheque, so that the whole transaction was transparent. 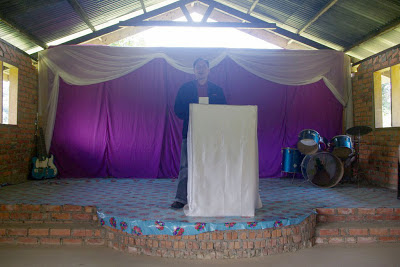 The pastor gave a little explanation about how the donation from a West Malaysian towkay came about (I had to correct him... the donor was a jobless father), and encouraged the congregation to be steadfast in faith and thank God for the blessing received.

The battered musical instruments in the background were a far cry from the shiny ones that I am used to, but they served the purpose. 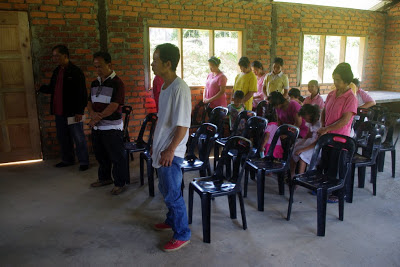 The little ceremony ended with everybody praying for the donor and his family, the congregation, and the church.

Field report done.
Posted by Michael at 4:55 pm No comments: 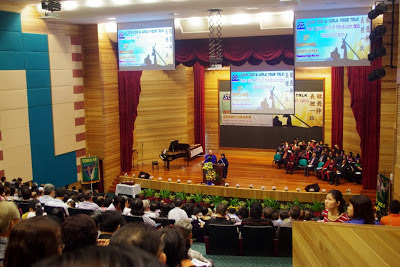 And we got to celebrate the graduation of uncle Rommie, who received his Master in Theological Studies.
Posted by Michael at 11:29 pm No comments: 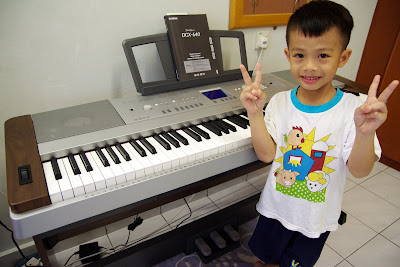 Now lets figure out how to use this thing.
Posted by Michael at 7:31 pm 1 comment: 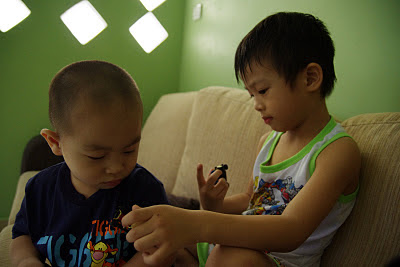 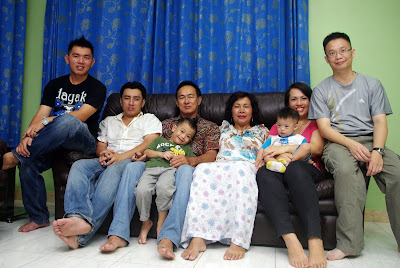 Took a photo before going to church. 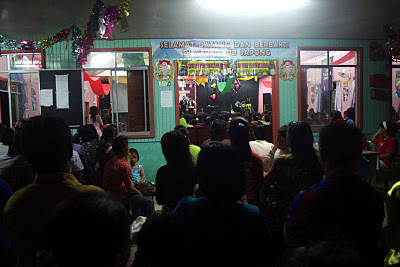 Kampung church fully packed and overflowed... despite without aircon and cushioned seats. Amazing. 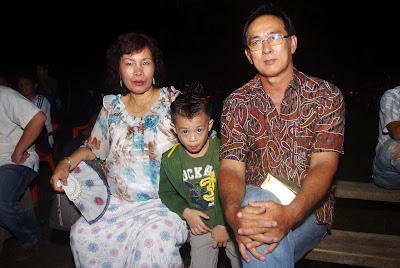 The manja boy ushering in 2012 with a new hairstyle.
Posted by Michael at 7:30 pm No comments: 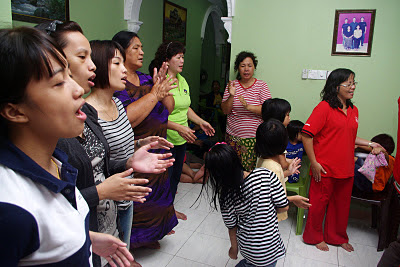 Irene's mum organised a Thanksgiving in the house in Tenom on the day before new year's eve. 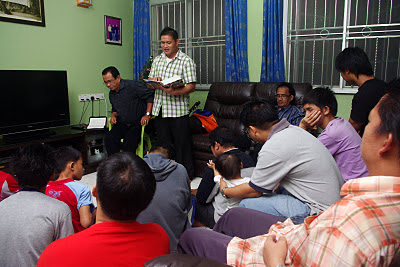 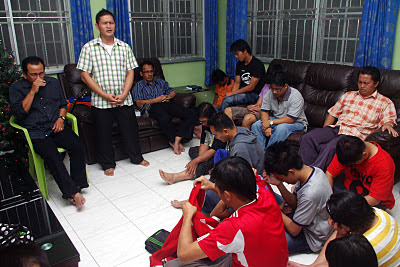 A time of prayer. 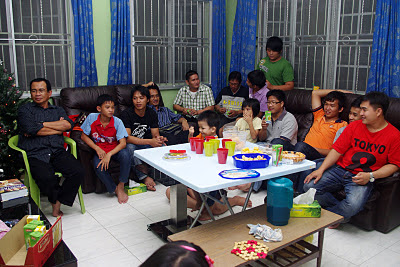 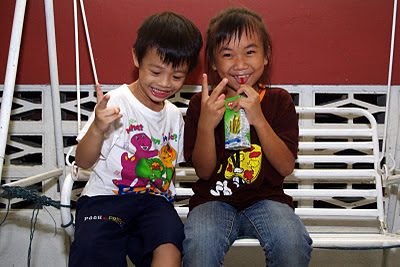 Ryan found an elder sister in kampung.
Posted by Michael at 7:30 pm No comments: