We have moved to Kota Kinabalu since last Wednesday. Little boy's granny dropped by over the weekend to see him.

Thank God for all the help we got to assist in the transfer. Got many hands from my neighbour Mr Leng's workers, the Methodist church pastor and members, and Irene's family. Over in KK, Irene's brother roped in some coursemates to help with the unloading.

As a newcomer, work is very very busy and tiring. So most of the time little boy accompanies mummy at home. Come and visit us when you are free. There are many shops and even a Giant hypermart, so it is easy to get things.

Shall update more when more free. At the moment, work is EOD and the patients keep us on our feet all night. Nothing like the dreamy days in Keningau.
Posted by Michael at 2:44 pm 4 comments:

A tree in Keningau 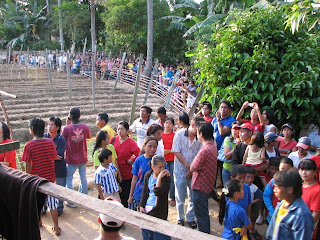 It is not often you get to see so many people young and old queuing up in a kampung in Keningau. There must be something big going on. There wasn't even a crowd like this when the Prime Minister visited Keningau not so long ago.

And these folks came armed with their cameraphones. 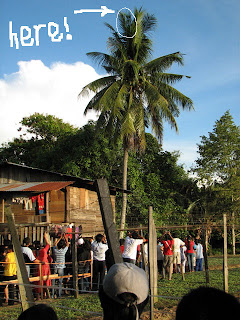 They came for this: the cross on the coconut tree. Can you see it?

I received an SMS from Uncle Sualim asking about the tree early this week. Was still in KL then. Promised to verify it when I go back. When I came back to Keningau, the folks here were all talking about it.
So, we went and joined the curious crowd.
It was late evening, and there were still streams of people making their way to see the much talked about coconut tree. It was situated beside a kampung house, surrounded by paddy fields and vegetable plots (poor farmer, his vegetables were crushed under the feet of the enthusiastic crowd). Heard that some visitors came from as far as West Malaysia and Singapore!
Not sure how the cross made it's way up the tree. Some said it's a miraculous sign, some said some insects bit it, some said somebody climbed up the tree and cut the leaves. Apparently a few people claimed to see images of Mary and Jesus. I didn't. Then again, they say you need some extra luck to see them. Guess I didn't. Hehehe... Some worshipers lit white candles beneath the coconut tree.
I thought somebody would have set up a toll booth and make a small fortune from selling tickets. Nah, people in the interior are not so greedy la... only got a few stalls selling drinks kampung style.
So, can you see the cross? If not, here's the zoomed image. 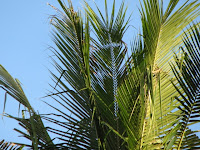