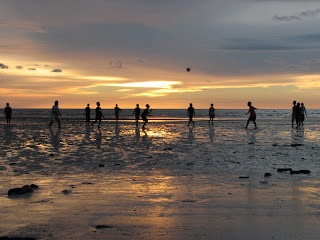 So I am convinced that we should enjoy ourselves, because the only pleasure we have in this life is eating and drinking and enjoying ourselves. We can at least do this as we labor during the life that God has given us in this world.
Ecc 8:15

*Location: Sipitang beach
Posted by Michael at 12:10 am 22 comments:

One of the advantages of being in the district is, you get to see and experience things that the city folks don't get to.

For example, to see one of these... 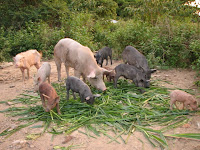 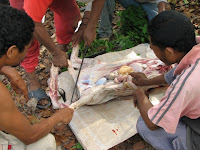 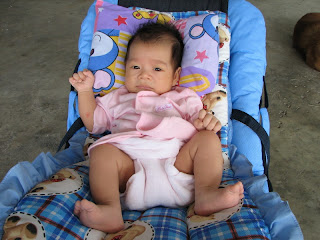 Little boy has grown quite a bit. He is now two month plus already. The last time we checked, he weighed 4.5 kg. My arms now ache after carrying him for a while.
Nowadays he spends much of his time punching and kicking around. As you can see, he has learned to laugh! He also makes some funny/cute noises quite frequently. Maybe he is trying to imitate some words or communicate something. 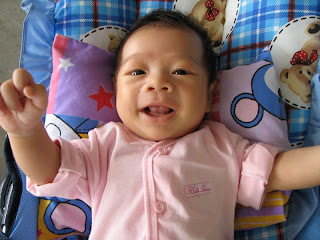 The great news is, his jaundice has cleared!
Little boy is quite manja with his mummy. He calls for mummy when he is hungry, wets his nappies, or just wants to be carried around. He doesn't berak as much now, about twice a week and A LOT. His still kencing a lot and soaks ten to twenty nappies a day.
His body muscles are stronger now. So it is easier to play with him and bathe him, compared to the time when he was lembik lembik during the first month.
To see more photos, click HERE.
Posted by Michael at 11:20 pm 1 comment:

Irene's grandmother has been ill with advanced stomach cancer. She has undergone a surgery in Kota Kinabalu, but the doctors couldn't do much anymore. She was discharged a couple of days later, and was then brought back to her home in Kampung Baru Jumpa in Tenom.
On Monday, the family prepared the place so that granny's friends and relatives (from as far as Sarawak and Indonesia) can come and visit her.
She passed away peacefully two days later.
The folks in Kampung Baru Jumpa gathered at the house to pay their last respects and to be with the grieving family. All her children came together too. 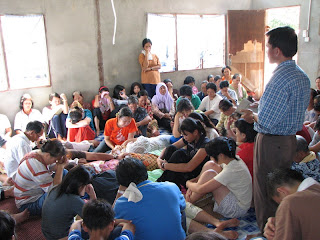 A simple but solemn funeral service was held at the grandmother's kampung house. There was sharing from the Bible with words to comfort and encourage the grieving. Granny had many friends. The house was very packed. She was laid to rest in the evening at the cemetery nearby. 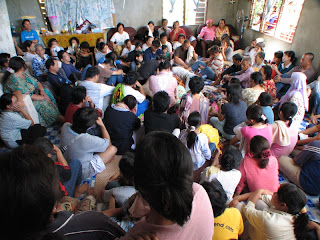 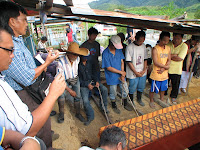 It was a sorrowful moment for those who miss granny's company and friendship. However, there was also joyful assurance that she has gone home to be with her God. She has gone to the promised place where there is no more tears, suffering, and sickness... a much better place than this world. And those who share the same faith shall one day see her again, there in heaven.
Granny did not have much wealth or possession to give to her children. Yet, she left behind something much more valuable: a legacy. I tried to summarise some deep impressions she left in me, and I could think of these...
1. Strong will and high spirit
2. Independant and adventurous
3. Hospitable
4. Positive outlook of life
5. Faithful till the end

I have fought the good fight, I have finished the race, I have kept the faith.
Henceforth there is laid up for me the crown of righteousness, which the Lord, the righteous judge, will award to me on that Day, and not only to me but also to all who have loved his appearing.
2Ti 4:7,8 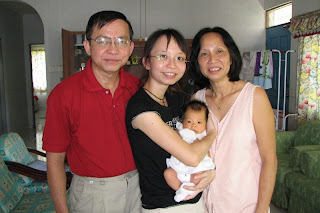 Little boy's grandparents (my parents, and sister la) came over from West Malaysia early this month to visit the new addition to the family. 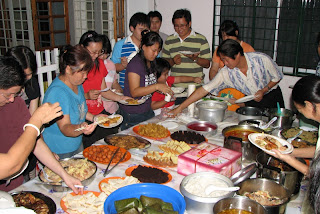 They came just in time when little boy turned one month old. So, we organised a little party for thanksgiving, as well as bidding farewell to family and friends in Keningau. We had guests from the local churches and the extended families from Tenom. 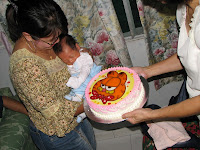 My hospital specialist gave little boy a cute Garfield cake. But since little boy did not have teeth yet, we makan la.
Posted by Michael at 10:12 pm No comments:

I've been on leave for a month. And so was away from blogsphere. Many things happened. What a month it has been.

Well, here are some updates.
Posted by Michael at 10:07 pm No comments: