Well, it's a pretty nice place, if you are the kind that likes green hills, fresh air and plenty of nature. But the roads can be cruel to your vehicle.

The journey from Kota Kinabalu to Keningau starts with a tortuous climb up Gunung Emas, then coming down to the paddy-growing town of Tambunan, followed by another climp up a smaller hill, finally descending to Apin-apin, where you get 20 kilometers or so of straight road into Keningau. The TungMa coach bus does it in 2.5 hours, I did 2 hours last time, the Hospital ambulance can get 1.75 hours if in distress. My neighbour claims to have done the track in 1 hour, without accident or police saman. 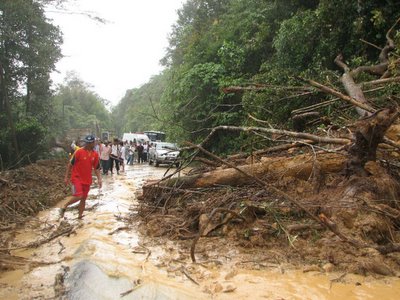 It is rainy season now. Landslides are a norm around these times. I was caught in one last week on the way down Gunung Emas. We waited for an hour, no bulldozer came. We had to force our way through, since my driver friend was catching a flight. His car got injured la. 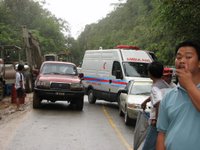 The hospital ambulance was stuck too. And luckily it was only carrying a patient requiring low-flow oxygen. The driver waited for a few hours, no help came, so he had to force his way through as well.

Stretch your imagination further. What if... the ambulance is carrying a lady in labour, or an oxygen-dependant patient while the tank is running low, or a bleeding patient, or a violent psychiatric patient... things could get pretty interesting. 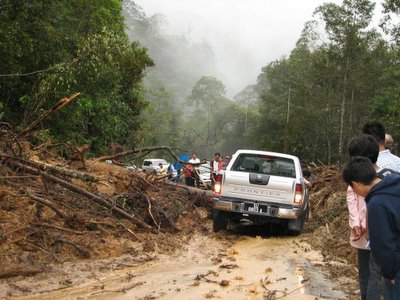 Medical service in interior Sabah can be challenging, or interesting if you look at it from the right perspective. 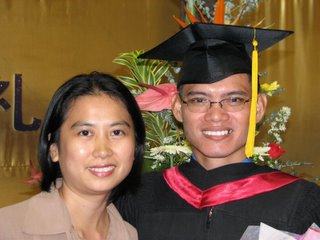 My friend Jastin graduated from the Sabah Theological Seminary two days ago. He earned his Bachelor of Theology after four years of gruelling studies; but lost his bachelorhood along the way.

I was at his graduation ceremony held at the Basel Church in Kota Kinabalu. Click HERE to see more photos.

Richard Konieczny, the Director of OMF Canada gave the opening sermon. Gosh you should see him speak! I have never seen an orang putih speaking flawless Bahasa Melayu like he did.

The closing speech made by the graduates' representative left an impression on me. Most of the graduates already have a stable job and family before entering Bible School. What made them, in their prime years, choose to undertake such a big turn of event to pursue Bible training? Are they out of their minds? As he put it, graduation is not an end, but the beginning of long suffering and great joy in pursuing their Master's calling.

Posted by Michael at 8:58 pm No comments: 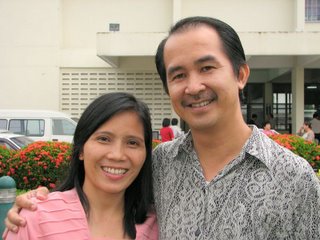 He was from Sabah. She was from Sarawak. One fine day they met in a petrol station, fell in love, got married and now have three lovely children.

Despite his dashing good looks and casanova flair, he remained faithful and made that message clear to admiring females. He makes it a point to call home whenever he goes outstation. And he could effortlessly preach way past midnight, yet keeping his audience thirsting for more.

She serves in the SIB Likas Church Office. Her radiant smile will always brighten up your day. And she makes delicious soyabean milk.

Posted by Michael at 8:52 pm No comments: 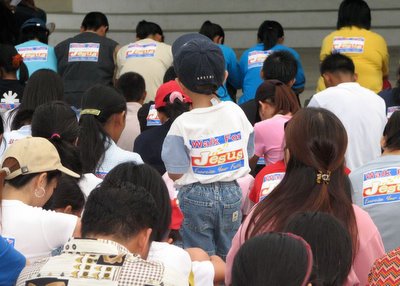 The Walk For Jesus event was held in Keningau on a Saturday evening on the 6th of November 2005. I was invited to become the 'unofficial' photographer and sermon intepretor (BM -> Mandarin).

About a thousand people participated. The gloomy skies cleared as the walk began. The theme stickers declared "Walk For Jesus, Exercise Your Faith". We came and we did. The local YB flagged off the event and led the walk. The journey passed along schools, villages and various government buildings, and the participants prayed as they trod on. I think we walked about 4 or 5 kilometers that day. In the end, everybody gathered at the Catholic Church field for the closing ceremony.

The Catholic Bishop gave the sermon, I intepreted. It was a first time and a scary experience. I dared not look at the crowd. Hehe...

Ever wonder... why did Jesus chose to be so poor during his brief stay on earth?

Well, most of us would do anything to pursue a better life of comfort, style and luxury. Even better, to be born into a rich family, or wed into one. Yet in the Book, there was this man who COULD chose which family to be born into, had what it takes to achieve great wealth and fame, wowed crowds and had people wanting to crown him king; yet shun them all and chose a life of poverty.

Oh, just look at the kind of friends he kept, and the people he mingled with. My goodness! Look at his attitude towards the rich and powerful that crossed his path.

Let me share with you this interesting passage I read this morning from a book by Philip Yancey.

Various scenes in the Gospels give a good picture of the kind of people who impressed Jesus. A widow who placed her last two cents in the offering. A dishonest tax collector so riddled with with anxiety that he climbed a tree to get a better view of Jesus. A nameless, nondescript child. A woman with a string of five unhappy marriages. A blind beggar. An adulteress. A man with leprosy. Strength, good looks, connections, and the competitive instinct may bring a person success in a society like ours, but those very qualities may block entrance to the kingdom of heaven. Dependence, sorrow, repentance, a longing to change - these are the gates to God's kingdom.

We who profess to follow this man, how do we fare? Do we notice such 'losers' that so impressed him? Do we, like most others, get so totally awed and fawn over the rich and famous, the strong and beautiful, the powerful and influential, and those with strings of titles before and after their names?

* the photo is not taken by me

Blessed? Calling blessed a bunch of losers? Hey cut it out!

Emm, I didn't say those things. The Man did.

So, how do we reconcile such mind-boggling statements with what we see in this real world? We have to, don't we, since we claim to agree to everything this man said. Then again, can you really believe him? Lets just make it easy, pretend as if he never said those things. Or just dismiss them as nonsense.

Seriously, how do you make sense of such total reversal of social values?

* the photo is not taken by me

Posted by Michael at 9:08 am No comments: